FREE US SHIPPING OVER $30 + FREE SAMPLES WITH EVERY ORDER!

Is animal testing even necessary?!

Some companies claim that animal testing serves a purpose, to make sure that ingredients are safe enough for humans. The TRUTH is, there are many alternatives to animal testing for ingredient safety. In Vitro testing (testing cultures outside a living organism) for example has many advantages over animal testing, by using cell tissues and computer models. Yes, animal testing is cheaper, but extremely unethical!

There are thousands of cosmetic ingredients that are already proven to be safe. This shows that we don’t need to test more ingredients on animals, because I would NOT want any chemical that requires that much additional safety testing in my Southern Magnolia products!

Lab animals are animals too!!

According to the law, lab animals form a special category of animals that do not get many protections from animal abuse and cruelty. Why protect our beloved pets from abuse, but lab bunnies, mice and rats suffer needlessly!?

Cats and dogs are also used in experiments…. Yes, you heard me right! This is in industries other than cosmetics, but still! Typically breeds that are known for their docile nature, such as Beagles. This makes me want to cry….

We need to be the change!

The Bottom Line: Southern Magnolia Mineral Cosmetics and many other other cosmetic companies have consciously chosen to go Cruelty Free, so as consumers it is up to us to send a message and buy only Cruelty Free products. This is not only about my products, this is about all of us making a choice!

Companies that do test on Animals

This list is straight from the PETA website. Some of these companies, (such as Proctor and Gamble) have declared that 'most' of their products do not utilize animal tested ingredients, but they have also stated that they will continue to use animal testing when deemed necessary.

There is a good video on PETA that is not impossible to watch. I learned a little bit more about it, including that they use baby primates, and kittens, among other animals, and that they end up blinding many of the animals, such as rabbits, that they test on. I suggest watching it if you use any of these products, and it will give you the inspiration to take the trip to a different store to buy products that not only don't use animal testing, but that also use naturally derived ingredients that are safe for you, your family, and our natural environment.

You learn more by visiting this link: http://search.caringconsumer.com 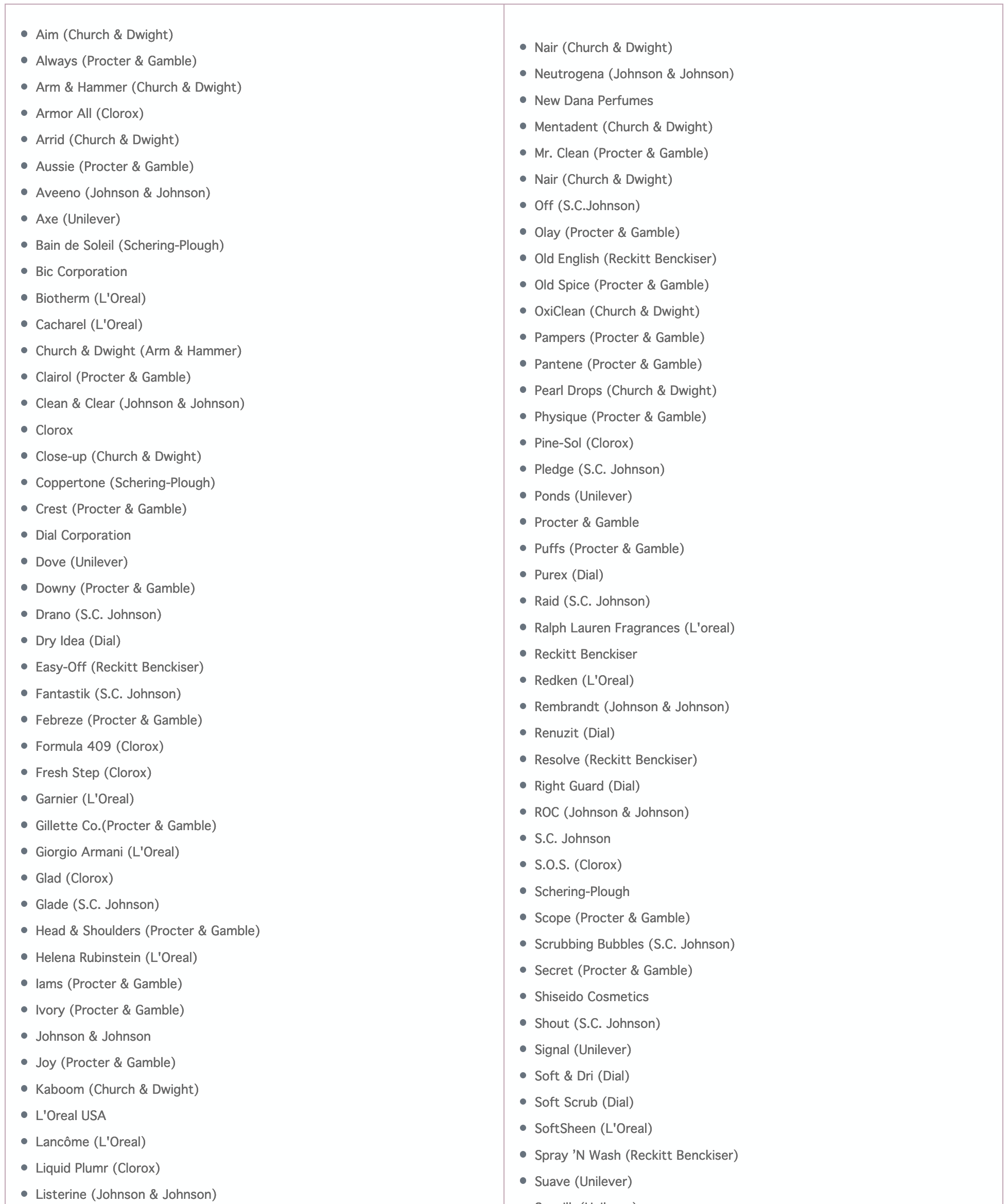